Prepare to jump to lightspeed

Disclaimer: I know nothing at all about how to program audio interfaces, but I seem to have been reading a bit about this topic in the last couple of days.

It started with this interesting piece on how development of Firewire drivers is going. I've not used any of these, but I did consider it as an option when I was buying an interface. I've heard that it matters what Firewire chipset you have. I just have what is on the motherboard and I only know that it works with my DV camera. This article has been discussed on the Linux Audio Users mailing list. I don't subscribe due to lack of time, but I check the archives now and again to see what is going on. Dave Phillips said it was on the list after I mentioned the article on Linux Musicians. It features people from the Ffado project who have tried to implement drivers for lots of interfaces, but have not had much help from some of the manufacturers. We have to accept that Linux audio is a very small market and they won't pay developers to work on it.

I also saw this piece on USB3. It's not Linux specific, but it seems there can be issues plugging USB2 devices into USB3 ports. I don't even have anything for USB3 yet. I'm not sure it's really needed for most audio work as USB2 seems to have ample bandwidth to handle many channels. Firewire was big on Apple machines, but even they are dropping it. Someone in the article actually says 'Firewire is dead'.

I also found this blog by a Canonical audio developer. It gives some insight into the sort of things they work on. I mainly work on Oracle database applications, which seem simple in comparison. When you are dealing with audio even the slightest timing glitch will be noticeable. I'd perhaps like to learn a bit about how DSP programming works some time.

On the home front, my next target is to install Ubuntu Studio plus KXStudio. I'll be dual booting with the existing Kubuntu installation as the family all use that. I want to try the newer audio applications, including those to store JACK configurations so I can easily start it up with the applications I want to use and just start recording. I especially want to try Guitarix. I keep hearing about the cool amplifier simulators on other platforms and want some of that action. I hope to get something set up over the next week or so.
Posted by Unknown at 21:09 1 comment:

I've been pondering the music I've listened to over the years that may have influenced me, although I'm still not sure what music I want to make. Anyway, here's a rundown of the 'tracks of my years' (or something like that).

I didn't really get into music until my mid teens. Before that I heard whatever was on the radio (generally Radio 2 at home) plus some assorted records that my parents owned. So I got a fair bit of exposure to a lot of 'easy listening' music. I watched Top of the Pops, so I knew what was out there.

At some point I got into ELO. I had their Time album, but also listened a lot to Out of the Blue. I still love that stuff. I think I liked the big orchestral sound. I then picked up on Queen and later Genesis and Pink Floyd. Queen were the first major band I saw live (Works tour at the NEC). I made a lot of use of the record library (and the local blank cassette dealer!).

Although I had a guitar when I was about 10 I was only playing classical for the first few years. At university (well, Coventry Poly) I bought a cheap Strat copy and a little amp. I seemed to play a lot of blues then as I was listening to lots of Clapton from his whole career. I was also getting lots of Led Zeppelin, Deep Purple and ZZ Top. I wasn't so much into the more 'metal' acts like Iron Maiden, but I listened to whatever I could get my hands on, including the old Friday Rock Show with Tommy Vance.

I discovered Steve Vai via his work on the David Lee Roth albums and he blew my mind. He still does, but I've not kept up with his more recent albums. That led to Joe Satriani, who I do like, but don't find as much fun as Vai. I'd read about all sorts of guitarists in the magazines, but you wouldn't generally hear them on the radio and we didn't have Youtube back then, so I didn't always get to hear them.

More recently I've got into a range of music. I have a real thing for Björk. She doesn't use guitars generally, but her music and her voice really move me. I've seen her live twice and both gigs were amazing. I also got into bands like Eels, Queens of the Stone Age, Radiohead, Muse and King Crimson.

Lesser known artists I've also got into include Camille, Porcupine Tree and Frost*. I listen to a fair bit of classical music, but don't consider myself an expert on it. Composers I really enjoy include JS Bach, Stravinsky and Phillip Glass.

In the last few years the internet has become my main way of finding new music. Whilst looking for bass guitar tutorials I discovered there was such a thing as solo bass music by  Steve Lawson and Jeff Schmidt. Steve is exploring various interesting ways of marketing his music, including giving it away. I've been to a few of his gigs, which were magical, and met some interesting people there. A guitarist works in similar ways is Matt Stevens. I really want to get to one of his gigs some time.

I've been to lots of gigs over the years from tiny pubs to Wembley Stadium. Both ends of the spectrum can be good, but I'm preferring the smaller scale events these days. A great instance of that was the gig I went to last week featuring Static Plan, Dorje and The Drills at the Purple Turtle in Camden. It's a tiny club that was packed with guitarist as Rob Chapman of Dorje runs a guitar forum and Phil X of The Drills is a legend due to his videos for Fretted Americana. The Drills were the real stars and played a storming set. One of the best sets I've seen. You can get a flavour from this video shot there:


I came away with a couple of great, but very short albums 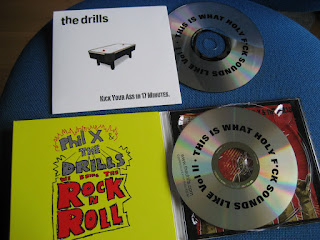