Some may wonder why I even bother using Linux when it's probably less easy than the alternatives. Part of the reason is cost. I can try out lots of different free software for nothing, but still contribute something to the projects I really like. There's also the other dimension of free (that may get lost in English as we use the same word for different concepts). This is free as in speech. After my Amiga days I used Windows 98 and 2000, but got frustrated by their limitations. I don't want the operating system to be stopping me from doing things and that's the way Microsoft and Apple were going. The developers behind Linux are not restricted by what they can get away with selling and can concentrate on solving the issues that frustrate them. I know some people in the media industry don't like that sort of anarchy, but they need to concentrate on finding other ways to make money from their so-called 'product'. I'm reading Cory Doctorow's Content at the moment and he has a lot to say on this.

Personally, I am not into getting everything for free as I can afford to buy the music and films I want. I'll try to do this in ways that get the most money to the artist, e.g. via Bandcamp.

I also like the interesting stuff that people are doing with Linux, such as the JACK Audio Connection Kit. I'm sure there are similar concepts on other platforms, but I've not used them.

What I would like to do is to install Ubuntu Studio on a spare partition and then add the KXStudio add-ons that include all sorts of cool stuff. As the guys on the Penguin Producer podcast said, FalkTX, the guy behind KXStudio, is some sort of programming machine and I want to be able to play with those tools. I'm not sure I can optimise my main Kubuntu system for audio and still have it usable by the rest of the family, so I will have to dual-boot for recording. I'd rather not as that adds an extra barrier, but it seems the best way, given that I'm not buying another PC just now.

I haven't done much recording since the Six String Bliss project. That has had some nice reviews and some very interesting comparisons to other artists who I don't really consider to be influences. I think it's just what I sound like and I'd rather sound like me than someone else. I think my next couple of projects will be some cover versions to practice my recording skills. I really need to look more at the available effects.
Posted by Unknown at 19:58 2 comments:

I've been a member of the Six String Bliss community for a few years since I discovered the podcast. It's small compared to some other guitar sites, but very friendly. I've met several of them and regularly chat with others. One of the fun features is the production of an album twice a year. A topic is chosen and people can submit songs either individually or in collaboration with others. I've been on a few of these now. One was a collaboration with several others on a Slade song, but the others have been solo efforts. Previously I have not done full song recordings with multiple parts, so these have been good opportunities to learn about the process.

Previously I've used a MIDI file I downloaded for the backing, but this time I wanted to do it all myself. The topic was 'Songs released in 1987' and I chose She Drifted Away by Hüsker Dü from the Warehouse: Songs and Stories album. It seemed fairly simple and achievable. Then I found myself thrown by the 3/4 time signature. I wrote a bit about how I worked around this previously. Once I had the drums I did the main guitar part with my Roland Cube 80x running direct and recorded in Ardour. I managed to accidentally slightly change the feel of the intro riff, but I don't worry about exactly copying the original. I think I did the first vocal take next, but slipped up slightly. I was monitoring on headphones, but didn't realise I'd left the PC speakers on! You can hear it on the track, but I didn't think it worth re-doing just then. Then I added bass. I'm no bass player, but I've got a Peavey Milestone bass from a friend which I ran that through my Zoom H4 to use one of the bass amplifier models. I need to experiment more with those as I wasn't hearing much difference between them.

I added a couple more vocal tracks to give a bigger sound on the choruses. It wasn't intended, but the result has a bit of a sea shanty feel to it. I also doubled the main guitar part and added some high parts where the intro riff is repeated using a different model with more gain on the Cube.

I asked my friend JMan to have a listen and offer his opinion on what effects I should add to make the mix work. He had a few hints about use of reverb and compression. The bass in particular needed something to make it more consistent. The compressor settings I ended up with gave it a grittier feel that I liked.

Trying to mix was not helped by having blocked ears at the time. That's what prevented me re-doing vocals and the deadline was looming, so I sent it off as it was.

The album was launched in a special show. It's fun to hear the details of each song and the opinions of the hosts Clint and Alicia. Alicia has said before that she's a fan of my singing (!) and was disappointed that I did an instrumental last time. I think she actually said that this track was her favourite on the album. Comparisons were made to They Might Be Giants and Steve Howe, which I'll take as compliments. As always I am stunned by the quality of tracks that others put out. Mine sounds distinctly amateur by comparison, but I'm really happy to be accepted as part of this community. I'm looking forward to the next project.


You can download the album for free. Reviews are posted on the forum.
Posted by Unknown at 12:05 No comments:

I thought I'd write a bit more about the Zoom H4, which does look like something you would use to subdue an assailant with an electric shock. I've yet to have anyone ask me if it's a weapon, but haven't tried taking through an airport in hand luggage.

I bought the H4 when I was trying to expand my options for recording beyond what I could plug into the PC soundcard aux input. I didn't own any decent microphones, so couldn't do any vocal or acoustic recording. I also wanted to be able to record in other locations such as the African drumming group I used go to and some of the concerts my kids play at.

There are some other similar devices out there, but I went for the H4 as you could record either with the built-in in microphones or plug in a guitar and have some effects to use. I never owned a 4-track cassette multi-track, but this is a modern equivalent. You can do most of the same things, including bouncing tracks to get more effective tracks, but I have only done basic stuff in that area. I have done lots of field recordings and the quality has been generally good from that, although you have to make sure you set the correct levels. Loud bands require low gain. I've only once recorded at a professional gig, but that was a small venue where I had the permission of the band. I've not tried sneaking it into any big gigs, but it's quite bulky and tricky to hide.

As an audio interface it is plug and play with Linux. You get prompted whether it should act as a card reader or an interface. It's only USB 1.1, and so limited on transfer speed. As with most such devices you only get 16 bit stereo at either 44.1 or 48kHz. In standalone mode it will do up to 24 bit at 96kHz, but I've not used that mode. I didn't initially realise that you can also play sound from the PC through it, but that means you can do all monitoring from the headphones on the H4.

There are a variety of effects built in as found on other Zoom devices. These are perfectly adequate for practice and demos. One of the downsides of the H4 is that the controls are quite fiddly. You have a joystick on the front and a small wheel on the side that do all navigation. Just tweaking a setting on an effect requires lots of operations. Entering names for tracks and effects is done in the same way. You can apply some modeling to the microphones that is supposed to simulate some classic microphones. This is something else I haven't tried, but ought to run some tests. 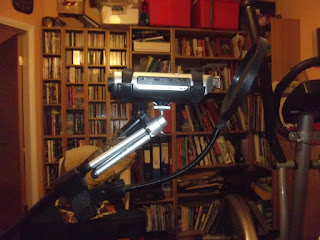 For many application you will want to mount the H4 on some sort of stand. It comes with a cover that you strap on with velcro and has a standard camera tripod threaded hole. I've used this with a GorillaPod in various locations. When recording at home a normal microphone stand is more versatile, but the only adaptor I've seen to convert between the two types of thread is by Roland and relatively expensive. I eventually worked around this using a very cheap (£1) tabletop tripod and some tape. I plan to get an 'anglepoise' type stand that I can clamp to the desk. I should be able to attach to that in the same way.

Since I got my new audio interface I've continued to use the H4 as my microphones. You have to hit the record button to get audio (in paused mode) via the line out. I tried running it with USB power, but got some extra noise that way, so am using batteries (rechargeable of course).

I'd recommend the H4 if you have similar needs to me. As there are newer models that do more you can probably get one for a good price now.

I created a page for the H4 on the Linux Musicians wiki. Perhaps others will add useful information there.
Posted by Unknown at 13:12 No comments: